On October 16th, Animal Crossing fans celebrated the 21st birthday of Pride Penguin villager Friga. In this article, we'll give you somethings you need to know about Friga, from her personality, hobbies and more.

In the Animal Crossing series, Friga is a snooty penguin villager who has appeared in all games to date. Her name may have been named after the Norse goddess Frigg, sometimes called Frigga, or the name may have been derived from the word "frigid," which means cold, which is associated with penguins being Antarctic creatures. Most players prefer the latter.

Friga has the fashion hobby, you may see her wearing a pink purse with a white flower on it, as well as specific headwear or accessorie item. She is also known for her Snooty mood, which is sometimes boring to fans. 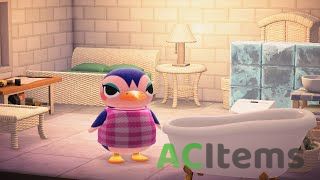 In Animal Crossing New Horizons, Friga is also sometimes described as a snooty villager, which also means she loves makeup and gossip. Due to her cold nature, she will show disapproval or contempt for others. Friga won't get along with lazy villagers because they don't care about their appearance, however, she will get along with grumpy villagers because they have similar rude personalities and are usually normal villagers too. In addition, since she's a penguin, she has a love for cold weather. Although she can live with any season,  that doesn’t spot her from complaining about them when it changes not according to her favor.

Aside from her appearance and the personality that she possesses, Friga is also known for her lovely home decorations inAnimal Crossing. In the game, Friga has an elegant house with mostly luxurious furniture. She has the sno-cone tee and bubble tee, and two umbrellas. She has the arched window wallpaper and classic carpet , and on her stereo, K.K. Tango is played.

In New Horizons, Friga house takes on a different appearance, with a toilet, a bathtub and shower, a bowl sink, and an aqua CD player, playing Farewell. She has white brick walls and marble tile floors. She has a blue ice wall that separates the bathroom furniture from the rattan vanity and wardrobe, with air conditioning above the rattan bed.

The above are some interesting things about Friga in Animal Crossing. Do you like the snooty penguin vllager? In ACItems, you can buy any Animal Crossing Items you like with fast delievry and cheap prices.